On New Years Eve I took up a challenge to read 12 books that had been sitting on my book case gathering dust for longer, and certainly no less, than a year. When the list was formulated I was in the middle of the "Christmas Bender" shall we say and I didn't really think about my selections very carefully. It might even be worth pointing out that I wasn't within 1,000 miles of my book case at the time. My selections were made by referencing the picture seared onto the back of my eyelids following years of neglect shown towards masterpieces that deserve a much more caring and dedicated owner than your humble narrator. I mixed a cocktail of old, new, edgy and easy titles to give me the best chance of success in the months ahead before getting on the saddle with my first title. In the time since I began the challenge I have finished one book on the list, read "A Clockwork Orange" and am currently reading "American Psycho".
Needless to say, after 1/3 of 2012, the challenge isn't quite going to plan. I have reverted to type and randomly chosen books that take my fancy while simultaneously throwing the "challenge titles" back on the scrap heap to collect dust and look fancy when people call round. Though they never do.
In actual fact by January 6th I had finished the first of my 12 challenge books, "Divorcing Jack" by Colin Bateman. It is only through sheer neglect for my NYResolution that I am not more advanced in my quest to conquer some of the greatest novels ever written by man. It stops now. I hereby submit my review. NAY! The first review of twelve that will shine down on you with apostolic glory between now and 2013!

Unlike many of the titles in this challenge, when I lifted "Divorcing Jack" from the shelf it wasn't following a period of long term neglect. Rather it was following a period of self-inflicted abstinence from an author whose work I thoroughly enjoy. In order to savour the feeling I made a decision early on to take time between his published works so as to prevent the inevitable withdrawal symptoms that would surely come when I had read more material that was physically available.
My first encounter with Mr Bateman was several years ago when I was gifted a more recent release entitled “Belfast Confidential”. It embodied many of the same qualities present in “Divorcing Jack”, though if you ask a good friend of mine he will tell you the former lacks the quality of the latter. All the same we are not here for a comparative study; you want to know what the book was like.
The story has a simple premise. A typical Northern Irishman finds himself in hot water as a result of moonlighting for the local government while working as a journalist. A series of ridiculous yet believable events ensue as our narrator guides us through the Northern Ireland of the late 90s. The leader of the local assembly, ex-IRA members turned gangsters, Loyalist Paramilitaries, a stand up comedian, a nun and even the narrator's wife fall under his suspicions as he tries to find a tape that will help solve the murder of his, albeit fleeting, bit on the side. The results are a mixture of hilarity and suspense that leaves the reader yearning for more. There are many works of literature which deserve time and patience, yet with “Divorcing Jack” neither is necessary as the reader is immediately captivated by this well paced thriller. Each chapter leaves the reader desperate to find out what will happen next. As you probably know, there are very few books which do this well.
Technical proficiency aside, what I enjoy most about Bateman’s work is that it’s from home and by a published author ready to move past “The Troubles” and have a look at Northern Ireland as we stand. It may not be my viewpoint, the main character is in fact politically juxtaposed to me, but it is a viewpoint all the same. A witty, captivating and scarily accurate depiction of a state that is struggling to come to terms with it’s ever changing identity. The more I read Bateman, the more I like him. I was skeptical at first and wary of his sense of humor, as it often poked fun at people or groups I related to. Yet as anyone who reads his work will find, no-one is safe from the fun poking and stereotypical Irish craic that Bateman so eloquently puts on paper on a regular basis.

The Jude Allen Quinn Show by Judeallenquinn on Mixcloud 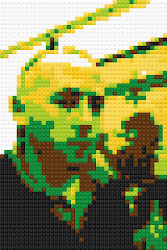 If even the tiniest of pieces were to fall into the wrong hands!